You are using an outdated browser. Please upgrade your browser to improve your experience.

Marca Corona: the ceramic company and its protagonists

Let's look back together at the history and stories of the people who have contributed to the success of Marca Corona, an Italian ceramic excellence since 1741

In the journey of a community and a company, it is people who make a difference. This is also what happened at Marca Corona.
What makes the destiny of an entire district - still the cradle of Italian ceramic excellence - prosperous is the people who have contributed to and accompanied the evolution of our ceramic company.

An exciting journey that began, precisely, back in 1741: this is the year of the foundation of the "Fabrica della Majolica" by some members of the Sassuolo bourgeoisie.

After about 10 years, the "Fabrica della Majolica" was handed over to the first true protagonist of our history, Giovanni Maria Dallari.

Let’s find out more together.

After being granted exclusivity by the Duke of Este, Dallari enabled the factory to achieve excellent commercial results in a short time and artistic originality that was second to none among the major Italian manufacturers.

Dallari called his son Giovanni to his side and surrounded himself with prominent figures such as the painter Pietro Lei, made famous by his work in Pesaro, and Leopoldo Finck, a ceramist from Vienna who had moved to Bologna. They were later joined by other ceramists who enriched the Sassuolo factory's technological and artistic heritage, thanks also to the use of fine materials and innovative production techniques.

When Giovanni Maria died, the manufacturing was officially passed on to his son Giovanni.

In 1791, the ducal government revoked the exclusivity, causing a serious backlash that brought Dallari and the entire district to its knees. Difficult years and numerous vicissitudes followed, which led Giovanni Maria's sons, Onorio and Costanzo, to sell the factory in 1835 to Giovanni Francesco Maria Ferrari Moreni, already the owner of the Sassuolo Mill.

Count Giovanni Francesco Ferrari Moreni, a leading exponent of the Modena nobility and the archducal court, acquired a factory in dire financial straits, but was not deterred by the venture.

He decided, in fact, to focus on a production-based almost exclusively on the use of earthenware, proposing innovative mixes and decorations that followed XVIII century English and Venetian fashions, at that time close to the tastes of the Modena court. The quality of the products on offer led to widespread success in the area and marked the beginning of a real economic recovery.

In 1851, the count was elected Podestà of Modena. With regret, he distanced himself from interests in Sassuolo and was forced first to rent and then sell the factory to a skilled entrepreneur who would mark the history of ceramics in the area: Giovanni Maria Rubbiani.

The Rubbianis and the ceramics of united Italy

The second half of the XIX century was the period of innovation and investment, under the leadership of Giovanni Maria Rubbiani, his son Carlo and his brother Don Antonio.

Thanks to their social and political commitment and enlightened personalities, the conditions of workers improved significantly.

The artistic side and factory training became of primary importance: it was a true golden moment, in which Sassuolo ceramic companies - a flourishing production with oriental and neo-Renaissance influences - stood out at provincial, regional, national and universal exhibitions in the first decades of the young Italian state.

By the time of Carlo's death in 1891, the Sassuolo factory was a state-of-the-art company that also produced ceramic plates for roads and ceramic wall and floor tiles.

These products are manufactured according to the revolutionary dry-pressing process, a method that makes it possible to:

The occasion for a real public presentation, where dry pressing caused quite a stir, was the National Exhibition of Ceramic and Glass Art at the Museo Artistico Industriale in Rome in 1889.

Here, the "majolica tile sample" arouses visible distrust in other manufacturers. Nevertheless, this is the very product that marked the industrial cornerstone.

The XX century and the Olivari phase

The very different entrepreneurial skills and the continuous disagreements among the various heirs plunged the "Ditta Carlo Rubbiani" into a new moment of crisis.

This led to the subsequent establishment of the new company "S.a.S. Carlo Rubbiani, of Rubbiani, Olivari & C" and the appearance of a new entrepreneur, the industrialist Matteo Olivari, a Ligurian living in Milan, who bought the factory from the heirs as administrator of Rubbiani.

Given the notoriety achieved, the ceramic tiles retain their old name, but the administrative headquarters are moved to Via Montenapoleone in Milan.

The diversification of the business, which brought the addition of an electrical workshop, the contracting out of the supply of Sassuolo's public lighting, and the production of industrial ice, allowed for a substantial and rather rapid recovery.

In the 1920s, the assets of "S.A.S. Carlo Rubbiani" were transferred to the "Società Anonima Ceramica di Sassuolo". The President is Pietro Vaccari from Modena; and the directors are Matteo Olivari and Prince Emilio Odescalchi. Almost all the other members of the Board are also from Milan.

There was a major expansion of the company and an upgrade of production with:

The flourishing and high-quality production of the Società Ceramica di Sassuolo was not hit by the deep financial crisis of 1929 that instead affected the industries of the province: on the contrary, Olivari's strong managerial skills led to exponential growth, influencing other sectors as well.

World War II and the birth of Marca Corona

Olivari's sudden death in February 1932 led to numerous changes of the company name, which merged in December '35 into the "Società Anonima Ceramiche Marca Corona", with its administrative headquarters in Milan.

This was a period punctuated by adverse events for the economy, primarily the shortage of fuel material due to the Fascist regime's autarchic policy.

With the outbreak of World War II, 143 women replaced the men in the factory and took the company's destiny into their own hands.
In 1942, with the bombing of the Sassuolo area and the ban on the manufacture of glass and ceramics, the Marca Corona factory was severely damaged and its future compromised.

After the end of the war, the ceramic floor and wall tile company gradually managed to recover and focus on progressive expansion.

In 1975, the factory was located outside the city centre to allow the construction of new plants and reduce traffic and pollution in the city; in 1982, Marca Corona became part of the Concorde Group, the first European ceramic group with Italian capital.

In the decades that followed, the company was internationalised, but maintained strong ties with its origins and territory, contributing to numerous redevelopment initiatives and adopting a green-oriented approach to safeguard the environment and promote sustainable production.

The long history of excellence of Sassuolo ceramics is proudly recounted in the company museum, thanks to more than 250 pieces including manufactured articles, documents, photographs, and memorabilia that bear witness to the growth and values of a community and the personalities that have made our company great.

Would you like to learn more about our history?

All you have to do is book a guided tour in our Company Museum, or download the Virtual Guide full of insights and curiosities!

Visit Galleria Marca Corona
Contact us for more info
Add to bookmarks
Share this article
Newsletter subscription
Do you want to know the latest
from Marca Corona?
Sign up for our newsletter 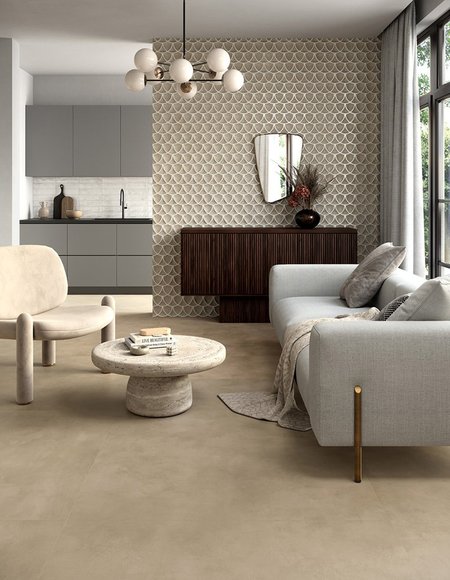 When the Mix & Match of ceramic surfaces defines a furnishing style 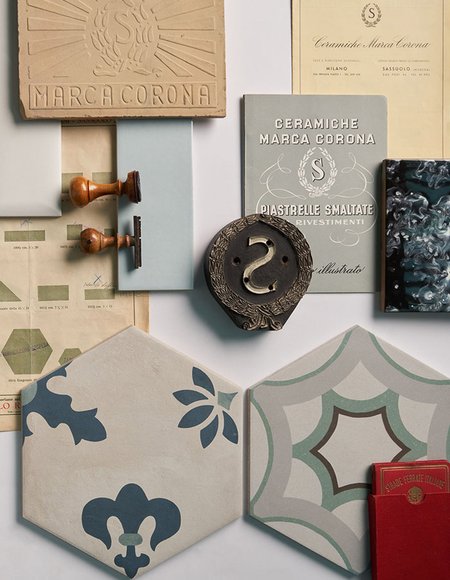 From past to present, ceramics reinterpret their own history 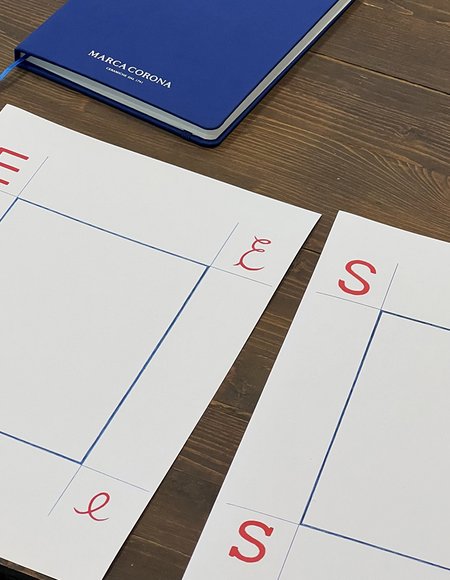